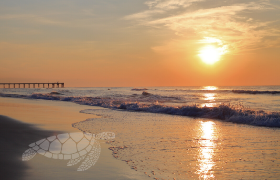 This 26-mile barrier island has long been one of our community’s great treasures, but it is not going unnoticed much longer.

Our State magazine featured Topsail Island and the surrounding communities in the magazine’s June Coastal Issue. Featured in the magazine are many favorites, including Batson’s Gallery (Surf City), Beach Shop & Grill (Topsail Beach), Breezeway Restaurant (Topsail Beach), the Topsail Beach Skating Rink, and the Surf City Ocean Pier and Soundside Park. These businesses were not the only places featured. The magazine dove into showcasing several historical landmarks. To include the concrete towers that stand out from the vacation houses that dot the dunes (Operation Bumblebee, a top-secret testing program conducted by the Navy after World War II); as well as the Karen Beasley Sea Turtle Rescue and Rehabilitation Center.