JOEMC Mourns the Loss of Board Member Horace Phillips 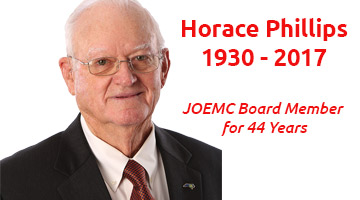 Horace Phillips, Jones-Onslow EMC board member for 44 years, passed away on Sunday, March 12, at the age of 86.

Mr. Phillips, the Vice Chairman of the cooperative’s Board of Direc­tors since 2002, had served as a board member since November 1972.

Mr. Phillips represented District Three of the cooperative service area and was dedicated and faithful to Jones-Onslow and its members during his years of ser­vice. He valued his position on the board and understood the critical role he played in making Jones-Onslow one of the leading electric cooperatives in the United States. He particularly enjoyed annual meeting time and when the cooperative returned capital credits to members be­cause as he once said “it was what being a cooperative was all about.”

A native of Jones County, Mr. Phillips had a distinguished career working his family farm west of Trenton and was dedicated to his family, country, and community. He is survived by his wife, Agnes, as well as three daughters, seven grandchildren, and one great grandchild. Mr. Phillips proudly served in the United States Army for two years. After returning from the service, he began his commit­ment to making his community a better place, by serving on the Lenoir Commu­nity College Board for 12 years, the board of Branch Banking and Trust for 37 years, and as a Commissioner for Jones County for 36 years.

“The Board of Directors, cooperative members, and our community, will miss the leadership that Horace Phillips has pro- vided over the years,” said Jones-Onslow Chairman of the Board John Pierce. “He touched so many lives…his friends and family, his JOEMC family, and the citizens of not only Jones County but eastern North Carolina. Mr. Phillips’ life was one that was truly about service to his fellow man.”