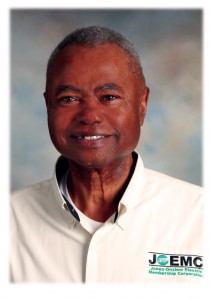 Reverend Mack Whitney III, Jones-Onslow EMC board member for more than fifteen years, passed away on Sunday, September 26, at the age of 67.

Mr. Whitney, who served on the board from March 27, 2001 until his passing, was dedicated and faithful to Jones-Onslow and its members during that time.

Representing District Two of the cooperative service area, Mr. Whitney valued his selection as a board member and understood the critical role the position played in making Jones-Onslow one of the leading electric cooperatives in the United States. In 2004 he earned his Credentialed Cooperative Director Certificate from the National Rural Electric Cooperative Association (NRECA), the national trade association for JOEMC. And, earlier this year, Mr. Whitney earned his Board Leadership Certificate from NRECA. Both certifications require course work that furthers board member’s knowledge and skills to govern their cooperatives effectively.

Born and raised in the Sneads Ferry community of Onslow County, Mr. Whitney attended school and worked almost all of his adult life in the area. He married his wife, Lorena, in 1970 and they went on to have four children as well as four grandchildren. Mr. Whitney had a distinguished career in law enforcement, working 32 years for the Onslow County Sheriff’s Department, where he attained the rank of colonel before retiring.

“The Board of Directors, cooperative members, and the community, as a whole, will miss the dedication and leadership that Mack Whitney has provided for all these years,” said Jones-Onslow Chairman of the Board John Pierce. “He always had a big smile on his face and was genuine…Mack was truly a man of integrity and dignity and our cooperative was fortunate to have him serve as a board member.”