Hugh Batts Retires from Cooperative Board after 49 Years 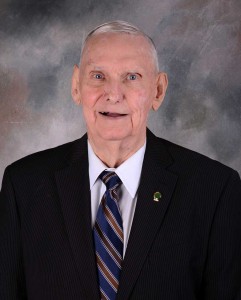 Hugh Batts, Jones-Onslow board member for the past 49 years, retired from his position at the end of his 14th consecutive term, on July 26 of this year.

Mr. Batts, who lives in the Hampstead community of Pender County, was first appointed to the board to represent Directorate District One in August of 1967. He served as vice chairman of the board from June 1996 to March 2002 and as chairman from March 2002 until March 2013.

Mr. Batts, who faithfully served the members of JOEMC during his tenure, has been a vital asset and contributor to the cooperative’s constant growth in membership and assets. He has been instrumental
in leading Jones-Onslow to the forefront of electric membership corporations in the country.

“Mr. Batts will ever be remembered for his leadership, character, and putting the members’ needs in the highest priority,” said CEO Jeff Clark. “We owe him a debt of gratitude for his dedicated service, his unwavering leadership, and his genuine concern for the employees and members of JOEMC…he will be sorely missed.”