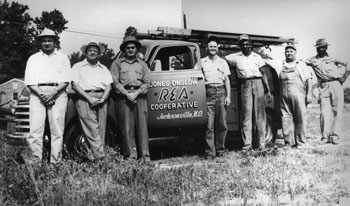 At the unusual hour of 2:00 A.M. in 1939, five men anxiously leaned against their parked cars on Hargett Street in Richlands to plan one of the most important meetings in the history of Jones and Onslow counties. The men were Albert Venters, E. C. Marshburn, Henry Cavenaugh, Rex Hill and William Hill. The meeting would be held at three o’clock the following afternoon in Jacksonville and at least 300 people had to be present to make it a success. Those attending, and future generations, would reap untold benefits. It may not seem like much of a task today, but this was in 1939 and the only people in Onslow County who knew about the meeting were these five men. How could they spread the word and assemble 300 people in just a short amount of time? The importance of the meeting was pale in comparison to the formidable job of informing hundreds needed to make the meeting a success. The meeting could not be advertised, as there were no local newspaper and no local radio station. There were only a handful of telephones and vehicular traffic was slow because only a few paved roads existed in the county. When neighbors help neighbors, however, even the impossible can become reality. The five men battled the odds and the following afternoon, a crowd of more than 300 overflowed the agriculture building on Old Bridge Street in Jacksonville. It turned out to be the hastily called organizational meeting of the Jones-Onslow Rural Electrification Authority, now called Jones-Onslow Electric Membership Corporation.

Jones-Onslow received its charter on June 22, 1939. The first Board of Directors President was E. B. Smith. The remainders of the Board of Directors were John L. Sasser of Kinston, Vice President; W. Guy Hargett of Richlands, Secretary-Treasurer; E. M. Philyaw of Comfort; H. Manley Mallard and B.C. Gray, both of Trenton; T. M. Rawls of Verona; A. B. Ervin of Richlands; and Albert Venters of Jacksonville. The cooperative’s attorney was J. K. Warren of Trenton.

The first loan from the Rural Electrification Authority was in the amount of $284,000 to build 227 miles of line in Jones, Onslow, Duplin and Lenoir counties for the purpose of providing electricity to approximately 1,288 consumers. Horace P. Cotton was appointed as Project Superintendent in October 1939, and the first office was rented in Richlands at $400 per year. Free office space became available in Jacksonville a few months later, and the office was moved. The first office in Jacksonville was above the Bank of Onslow at the corner of Court and Old Bridge streets. The first lineman employed was T. B. Jones, and Miss Addie Mallard was hired as the first stenographer/bookkeeper.

The original membership fee was $5.00. The Board of Directors was advised that since Tidewater Power Co. (formerly Carolina Power & Light, Progress Energy, and present-day Duke Energy) refused to sell power to the cooperative, the Jones-Onslow REA would be forced to build its own generating plant. The plant was constructed near the main gate of Camp Lejeune and was later sold to the United States government. The first Annual Meeting was held in Comfort on the 21st of June in 1940. By that time, the young cooperative had 706 accounts. In 1944, the cooperative rented office space in a cottage in the Overbrook section of Jacksonville, 205 N. Marine Boulevard. At this time, there were 1,105 consumers and 300 miles of line. Mr. Fred Harmon, Jr. was the General Manager. The cooperative moved to a new office and warehouse complex on Highway 17 South in 1954. By June of that year, Jones-Onslow had 6,195 consumers on 1,004 miles of line. 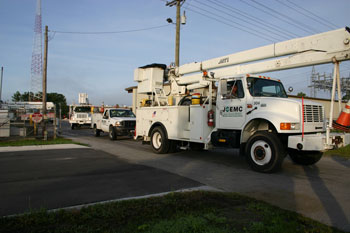 On January 1, 2016, Jeffery (Jeff) T. Clark, the cooperative’s Chief Financial Officer since 2002, assumed the position of JOEMC’s Chief Executive Officer. Mr. Clark, with over 40 years of experience working in the electric cooperative industry, succeeded J. Ronald McElheney, who led the company as CEO since 1988.