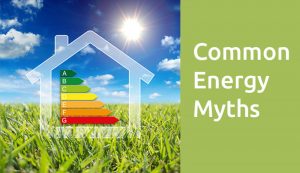 There’s a pot of gold at the end of every rainbow. Break a mirror, and you’ll have seven years of bad luck. These familiar myths and old wives’ tales (as well as many others) have been passed down for generations but when it comes to energy, myths can cost us valuable energy dollars. Read below and watch the video for the facts about common energy myths.

Myth 1…Heat With Space Heaters Saves Money
Space heaters may be small but they’re big energy guzzlers. Using a space heater in a room or small space, for a short time, isn’t so bad; however, if you’re using a space heater for long periods to heat large spaces, you’re increasing your energy use and bill. Use space heaters with caution because they can cause spikes in your energy bills. In some cases, it’s better to increase the thermostat a degree or two in your home if it isn’t warm enough. Energy audits have been conducted on homes where two or more space heaters were operating at the same time for large areas. This usually resulted in high energy bills and created safety hazards when placed too close to furniture or flammable materials.

Myth 3…Closing Vents Saves Energy
Closing vents in rooms that aren’t occupied or used often doesn’t save energy. Restricting conditioned air pushes it through other vents in the house. It can also cause backpressure on the fan that pushes the air through your system, which makes it use more energy and work harder.

Myth 4…Knocking the chill off
The term may be a southern thing but “knocking the chill off” a cold room or house by cranking up the thermostat to heat it faster skyrockets your energy bill. An extremely high temperature setting has little effect on how quickly your home heats up. In fact, it may increase your heating system’s run-time, which causes it to use more energy. Programming your thermostat allows you to set temperatures for while you’re away, at home and more. We suggest setting the thermostat at 78oF in the summer. Each degree below that increases your cooling costs by about three percent.

Myth 5…Flipping light switches on and off costs more
If you’ve been told it’s better to leave the light on than to flip the switch off and on, you can put that myth to rest. There’s some truth to this that stems from the early generations of light bulbs. Turning the lights on and off would decrease the lifespan of the bulbs; however, technology has advanced to the point that this is no longer accurate. It’s best to switch the lights off, even if you’ll be returning in a few minutes. Bottom line… it’s always better to turn “off” the lights when you leave a room.

Myth 6…Installing a larger HVAC system will be more efficient
Too large an HVAC system will increase energy bills, decrease comfort and shorten the system’s life. A system that’s too big runs in short cycles. Its energy use at start up is the highest, along with the wear on the parts. When choosing a new HVAC system, make sure the contractor does a load calculation for your home using Manual J to determine the precise size it needs to be.