Board names Jeff Clark as new CEO of Jones-Onslow 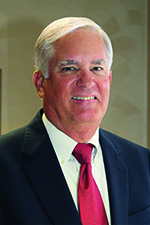 Jones-Onslow EMC’s Board of Directors has named Jeffery (Jeff) T. Clark, the cooperative’s Chief Financial Officer since 2002, to the position of Chief Executive Officer of the organization.

Mr. Clark, with over 40 years of experience working in
the electric cooperative industry, will succeed J. Ronald McElheney, who led the company as CEO since 1988.
Mr. McElheney will retire at the end of 2015 after a distinguished 45 year career at Jones-Onslow.

JOEMC Board President John Pierce stated, “Jeff possesses the knowledge and talent to continue to move Jones-Onslow forward in the coming years, focusing on providing the cooperative members with affordable, safe and reliable electric service while striving for the best customer service experience possible. The board looks forward to working with Jeff in his new position as we strive to meet future challenges in today’s unsettled utility industry.”

Mr. Clark has held numerous positions within the electric cooperative world starting back in January of 1974 when he was hired as a night dispatcher at Withlacoochee River Electric Cooperative (WREC) headquartered in Dade City, Florida. During his 18 year career at WREC, Mr. Clark was exposed to many aspects of the electric utility business, holding positions in corporate customer service, staking engineering, district office supervision, and as the co-op’s internal auditor where he was responsible for auditing all financial aspects of WREC as well as performing operational audits.

He came to North Carolina in 1992 when he accepted the position of Vice President of Finance & Accounting at Four County EMC headquartered in Burgaw. Mr. Clark worked at Four County until accepting his position at JOEMC in 2000.

“Jones-Onslow is well-respected in the electric utility circles in North Carolina and throughout the United States because the board of directors and employees work hard to provide their members with the most reliable power at the most affordable cost. I look forward to continuing that mission,” said Clark, after the Board President announced his appointment.

Mr. Clark is originally from Dade City, Florida. He graduated from Pasco-Hernado Community College and later received his bachelor’s degree in Business Administration (with a concentration in Finance) from the University of South Florida. Mr. Clark and his wife, April, have four children and live in the Swansboro community.